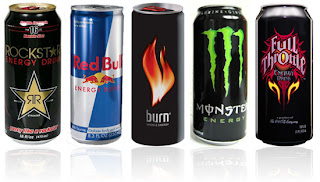 Monster.
V.
Red Bull.
Rockstar.
Mother.
Buzz Monkey.
Pimp Juice.
Spaz juice.
Burn.
Full Throttle.
Ooohhh, I was even debating whether or not I should bother with this post. We all should KNOW these things are probably the worst things you can put into your body.
They’re one step away from an illicit drug, I’m sure.
Deep down, we all know.
BUT…
I started to read article after article after ARTICLE and it would seem that logic has gone completely out the window. Allow me to explain…
These so-called experts, professionals, addicts, and opinionated fact-givers (aware the pot could be calling the kettle black here, but I assure you though I may be opinionated I’ll always give you an honest answer and work with logic, as well as facts) all have the same information on their sites. They list the ingredients regularly found in these drinks, and go on to describe why each individual ingredient is beneficial in our body. How it is either organic or is of no harm if taken in excess or produces all these fabulous mind enhancing and energy building effects. Oh sure, they go on to say that moderation is the key, and kids and pregnant women shouldn’t have them… but not many will out and out say what they should.
You do get the odd site that is spot on with their recommendations though: don’t touch the stuff.
Here is the problem:
1.       Caffeine is a stimulant.
2.       D-Pantothenol improves moods and energy.
3.       Niacin metabolises energy (turns carbs and fat into energy).
4.       Inositol has mood boosting effects (it’s used in Prozac for goodness sake).
5.       Vitamin B12 produces energy by breaking down fat and protein.
6.       Glucose, sucrose, dextrose (and any other sugar derivative) is sugar. It is DIRECTLY converted to energy.
7.       Guarana contains caffeine, and is thus an effective stimulant on two levels.
8.       Ginseng enhances the effects of caffeine, while also being a highly effective stimulant.
9.       Glucuronolactone is used as a stabiliser.
10.   L-Phenylalanine is an analgesic (painkiller) and an anti-depressant (and carcinogenic!).
11.   Taurine improves athletic and mental performance.
12.   Not to mention all the additives, thickeners, colours, flavours, and preservatives… AND all the other ingredients I haven’t listed, I don’t have all these drugs in front of me…
Now, mix all of that together at the same time, or at least a really nice collection of them. Add alcohol (which enhances the effects of most of these ingredients, as well as having its own effects), or an empty stomach, or an already depleted and strained body, or a developing body (think kids and teenagers)… see my problem yet? It’s too much at once. It’s too drastic.
It is
a legal addictive drug concoction,
and the companies responsible are making a mint.
The only difference between these drinks and illicit drugs, is that drug dealers were too stupid to market their stuff in effective packaging and advertise all the energy enhancing benefits of it.
This stuff in its natural form, ingested from its original source (whether it be fruit, veggies, plants, meat, breast milk, fish, whatever) and consumed individually, is probably good. Produced artificially in a lab, mixed with artificial sweeteners, artificial flavours, artificial colours, mixed with a whole host of other artificial rubbish and tossed in a can should be ringing alarm bells for EVERYONE.
Caffeine blocks adenosine, a chemical released by the brain to induce sleep. Since one standard sized can (250ml) energy drink contains roughly the same amount of caffeine as 2 cups of strong coffee (remember, guarana contains caffeine too), your brain very quickly releases adrenaline in response to its “fight or flight” reflex. Adrenaline causes your pupils to dilate, increased heart beat and palpitations, your liver releases extra sugar, and dopamine to be released by the brain (a chemical from the ‘pleasure centre”). Caffeine is also a diuretic – meaning it dehydrates you.
So caffeine stops your body’s natural desire to rest, and on top of that the rest of the stimulants now can run free in your body without meeting any natural bodily defences.
Just imagine, all of those stimulants at once. No wonder people have heart issues from them.
And diabetes, depression, poor sleeping habits, premature aging, permanent nervous system conditions, addictive behaviours, numbness, shaking and tingling in the hands and feet…
Not to mention the ghastly effect that all that sugar has on your systems.
The other thing we just don’t know is how these ingredients interact and react with each other. In their own right they are all effective stimulants. But mixed together? Who the heck knows what they can do. Some of these ingredients are known to increase your libido, some your sense of euphoria, some increase general mood, some your athletic performance and stamina, some are painkillers… all at once. Then, you have to come down from that high, and it’s usually a crash landing. Then you need another one. These drinks contain known carcinogens, and a toxic cocktail of stimulants.
And just in case you were wondering… sugar-free energy drinks are NOT your answer. Why? Because artificial sweeteners are carcinogenic.
That’s cancer.
Acesulfame potassium, Aspartame, Saccharin, Sucralose…  so you’re no better off with the sugar-free variety at all. It’s just more chemicals – KNOWN chemicals – that cause illness and cancers.
How did you ever live without these wonderful energy giving cans of love?!?!?! *insert sarcasm here*
All of this stuff negatively affects your brain, your systems and your health. That much is known. Even the companies that make “energy drinks” recommend no more than two 250ml cans per day. And that’s the company saying that.
How many do you think you have over the course of a night out? Plus your usual swag of grog? Do you need one every day just to get through? Or maybe two? 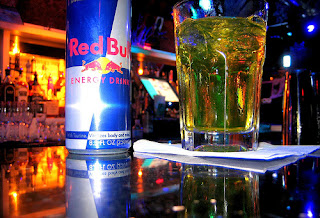 NO THANKS!!
For the sake of yourself, don’t ever buy these again. Your heart and brain(not to mention the rest of your body) will thank you for it.
Posted by Emily at 01:48