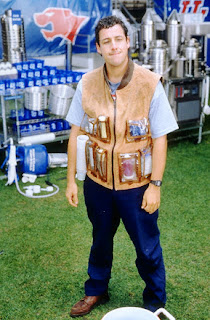 "Now that is some high quality H2O" - Bobby Boucher, The Waterboy

Many chemicals and additives are put into our water supply, and quantities vary from town to town, state to state and country to country. We’re told that these are a necessity to prevent bacteria, micro-organisms, and viruses. But what we’re not told is that these chemicals are either directly or indirectly causing us damage. Everything from irritable bowel and gastrointestinal distress, to headaches, to asthma, and cancers.

FLUORIDE
Fluoridation (the process of adding fluoride to a town’s water supply) began in the 1940’s, in a bid to reduce tooth decay and cavities in a society that was drastically increasing its sugar and processed foods consumption.
I think it’s important to note here that you can also prevent cavities and tooth decay by not drinking and eating sugar infused chemically laden poisonous products (think soft drink, and anything else swimming in sugars). Just saying…
Any research that suggests positive results from fluoride in regards to dental health is speaking specifically of topical applications. As in, when fluoride is applied to your teeth then removed without being ingested (swallowed), there is a reduction is tooth decay. The MASSIVE problem is, when you drink your 2L of water a day, where that fluoride is going and what it is doing to your body.
So let us break this down…
Firstly, adequate and acceptable amounts of fluoridation are listed as between 0.5 – 1.0mg/L (milligrams per litre), although measurements can vary greatly and accuracy and consistency are not guaranteed.
These are statistics given to us by the same people who fluoridate our water, so is any level of ingested fluoride acceptable??
At the very basics, fluoride causes fluorosis, a condition causing discolouration of the teeth from white spots to very dark smudges. It also causes an increased porosity of the enamel (larger pores), and in advance conditions can result in chipping, pitting, fracturing, and decay. Seems strange, no?
I thought this stuff was supposed to help our teeth? Oohh I get it – topical fluoride can help your teeth, ingested fluoride can harm your teeth from the inside.
Fluorosis occurs in more than 30% of American children now, with statistics getting higher as time goes on. As noted by Dr. Hardy Limeback, Head of Preventive Dentistry at the University of Toronto, "it is illogical to assume that tooth enamel is the only tissue affected by low daily doses of fluoride ingestion." Meaning, if it’s affecting the teeth, what else is it affecting??
According to the Physicians Desk Reference, 1% of the population (that’s around 220, 000 Australians) have a hypersensitivity to fluoride, an allergy. Reactions include skin rashes, mouth lesions, gastric distress, headaches, joint pain, weakness, visual disturbances, and lethargy. Any of these symptoms ring a bell?? Probably… The symptoms vary from person to person, that’s why it’s so hard to diagnose things like this and other dietary issues.
CHLORINE
Chlorine. It’s added as a disinfectant. So bacteria, micro-organisms, viruses, and anything else is destroyed. Simple? Except the by-product of this process produces trihalomethanes (THM’s), which are carcinogenic. So the solution is to change to Chloramine (part of the Hydrogen component of Ammonia (NH3) is changed to Chlorine) as a disinfectant, because it is much more stable and “does not dissipate from the water before it reaches consumers.” The tendency to convert organic matter into carcinogens (as in chlorination) is much lower with this process, but is less effective as a sanitiser, and more irritating to swimmers’ eyes when used in swimming pools.
Hang on, the cancer causing stuff is much lower with this process?! So, what’s wrong with Chloramine then?
I’m glad you asked! Wiki says in regards to Chloramine: “These methods of disinfection decrease the formation of regulated byproducts such as alkyl chloroforms, which has led to their widespread adoption. However, they can increase the formation of a number of less regulated cytotoxic and genotoxic byproducts, some of which pose greater health risks than the regulated chemicals, causing such diseases as cancer, kidney disease, thyroid damage, miscarriage, and birth defects.” Sooooo, some toxins are more regulated than others. The less regulated ones go through unchecked and are often more dangerous than the regulated chemicals!
PESTICIDES, FERTILISERS, AND HERBICIDES
Chemical spray runoff from crops easily gets into rivers, groundwater supplies, and dams. They last for years without breaking down, not only damaging the soil but the water it infects. Filtration and treatment processes in catchment areas often don’t treat for a lot of the chemicals used in farming today.
Yet another reason to support organics, you’re supporting those farmers choosing to keep chemicals out of our grounds and water supplies. Logic, really.
RUST, COPPER, AND LEAD
These contaminants will generally get into your water when it’s on its way to your house. The galvanised pipes underground, especially in older suburbs, are extremely prone to rusting, copper pipe corrosion, and lead leaching. Increased levels of these metals in your system result in developmental delays in children, liver issues, and brain dysfunction.

Some useful info you might like to know…
“A 1993 study in Canada discovered that users of reverse osmosis water filters suffered 30% less gastrointestinal disorders for the year.”
“Following the Vietnam war, thousands of autopsies on young, fit soldiers reveal high levels of cholesterol in coronary arteries, the cause being linked to the high volumes of chlorine in the drinking water.”
“Conventional water treatment is inadequate against chlorine resistant organisms such as Giardia and Cryptosporidium, viruses and a variety of other parasites. Approximately 1/3 of Australians suffer irritable bowel syndrome. The cause has not yet been established, but waterborne viruses and parasites are high on the list of suspects.”
(All quotes from www.watershop.com.au)
http://www.noblebeverages.com/net/water-and-you/ - This is an AMAZING article, with much more in depth analysis than what I have written here, it’s quite shocking actually. Please, please, PLEASE take the time out to read what is here!!

The water that comes out of your tap is laden with a cocktail of disease causing toxins. And considering we’re encouraged to drink so much of it each day, what should we do about it? Boil your water, get a rainwater tank, or get a good quality filter. Let’s explore:
BOILING YOUR WATER
Boiling for at least 20 minutes can get rid of harmful bacteria, as well as ammonia and chloramine. Let’s be honest, if you can’t get a filter or a tank yet, it may be monotonous but it is actually a good option. Get your soup pot out, fill it with water and bring it to the boil. Let it cool and fridge it for the day. Seriously. Go back and read about chlorine and chloramine if this sounds silly, because what it does to your body is anything but. You’ve just got to make a decision, do you actually want to feel good?
RAINWATER TANK
A superb idea. Free water, no chemicals. If you live on a small suburban block, at least get a small one for drinking water. You might empty it in summer and have to resort back to boiling, but at least for half the year, you’ll have beautiful rainwater. Here is some great general information in regards to your tank:
http://www.eastfremantle.wa.gov.au/uploaded/pdf/rain.pdf
As far as I have researched, the polyethylene used in the manufacture of fiberglass tanks is safe. If the plastic is heated to over 120C you have problems, other than that it’s fine. They are also UV protected. Concrete tanks are fantastic, although probably the most expensive to install. You can install them underground if you like, which is fabulous for keeping it at a cool temperature. Stainless steel tanks are also expensive to start with, but if you want quality and durability, this is a great option to go with. Google rainwater tanks in your nearest large town or capital city, or if you need additional info, ask me! Prices vary immensely, depending on the size, and what material you get.
WATER FILTERS
Get one. Even if you have a tank. The thing is, there is still the possibility of contamination in your tank… from bacteria, mosquito, runoff from your roof, etc. Ideally, you’ll want a filter that does “reverse osmosis”, especially if you decide not to get a tank. This is the only way to get chemicals and toxins out of your water. Reverse Osmosis is the only way to get efficient filtering of fluoride and chlorine, as well as all the other nasties. According to consumer review websites, PSI Filters is the way to go. They have an impressive track record and the least amount of complaints regarding durability etc.

In terms of going natural, holistic , and organic, effective water filtration is the first and most important step. Our bodies need water more than anything else to perform at it's peak, so if you're going to bother with only one thing, let it be a high quality water filter, for some high quality H2O!!

Don't forget to read this really important article if you missed it up there:
Noble's Pureau Water - Water and You